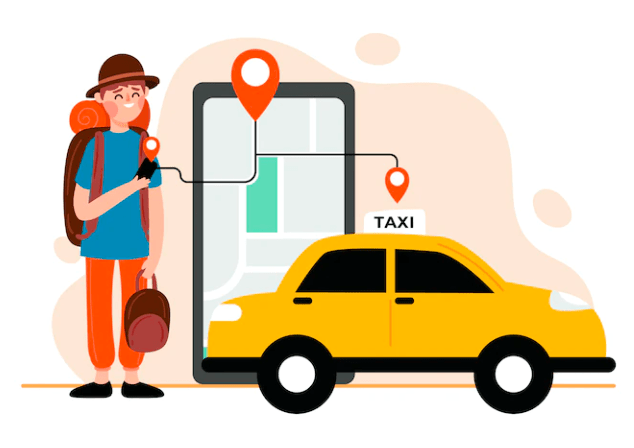 The report predicts that by 2020, the ride-hailing and taxi market will generate $222,276 million in revenue. Having created more than 50 of the finest taxi apps for clients worldwide, people are committed to learning about the most successful taxi apps from ride-hailing passengers and business owners.

People may easily plan and schedule a cab ride using the top custom taxi app solution providers in the USA and Canada like Uber, Grab, Lyft, and Careem. Furthermore, in today’s technological age, reserving a cab using a smartphone is the easiest and most preferred alternative that users can obtain while travelling, whether for pleasure or business.

The 9 Best-Performing Taxi Apps for Your Mobile Device The taxi sector is undergoing a tremendous transition thanks to taxi booking applications, despite intense competition.

The San Francisco-based cab booking app Uber is far and away from the industry standard. About 110 million people worldwide are expected to use the service by 2025, and its meteoric rise in popularity over the years has been hailed as a breakthrough in the transportation sector. The term “Uber” has come to mean “on-demand,” and now every service that can be provided on demand is being “Uberized.”

Taxi Magic and now Curbs identified the category of mobile applications before Uber did, challenging the conventional wisdom that Uber was the first taxi booking app. However, after deciding to expand to several different nations, Uber quickly became the most widely used platform worldwide.

Cabify, a Spanish taxi booking app, is a popular mobile app that connects users with private cars and drivers for safe and easy transportation across the city. A prearranged, chauffeur-driven vehicle that will safely convey its passengers to their destination of choice.

Overall, these taxi applications have raised $477M to further develop their online taxi services and expand into new cities. Launch the Cabify app, choose your destination, and select from various taxi options, including the Executive, Lite, and Easy Taxi. Learn more about the city or destination’s easy-access attractions to enjoy your travels without worry.

Request a trip in seconds, and within minutes, a taxi will be at your location, thanks to Curb’s network of over 100,000 drivers in most major U.S. cities. Easily travel between 65 U.S. cities with its convenient services, available to residents of New York, Washington, Chicago, Miami, Las Vegas, DC, Los Angeles, Boston, and Philadelphia.

The San Francisco, California-based Lyft app is the second-largest ridesharing platform in the United States. It is used in over 640 cities across the United States and nine cities in Canada. The top track-call taxi app competes with Uber, has a 28% market share and provides high-quality cab rides.

Lyft makes it easy to get a ride from a nearby driver who can take you straight to your destination with just one swipe. You may get rides from highly rated drivers by downloading Lyft and making reservations online.

Although it has a more extensive user base than Uber or Lyft, Gett, an Israeli ridesharing software formerly known as GetTaxi, nevertheless falls short of the competition. Due to direction and a desire to reinvest in the business transport sector, this platform, which serves 100+ locations worldwide, specifically in the U.K. and Israel, has just shut down its limited appearance in the U.S.

Customers may order Lyft cars using the Gett app thanks to cooperation between the two companies. In other contexts, customers might seek information about transportation options, including taxis and luxury car services.

A licenced ride-hailing app, the FREE NOW app is brand new in 2019 and already ranks among the world’s top 10 taxi services. Available in nine European countries, this taxi booking software makes it easy for passengers to arrange transportation, make payments, and finish their trips swiftly and painlessly. Riders can use the app’s features, including the location input field, taxi booking, arrival tracking, and fare payment, without leaving their seats.

Mobile dating service Happn The company, which has its roots in New York but now has locations in more than 20 countries, is owned and operated by locals in all but six of those locations. The collaboration and community groups make it work. The best long-distance taxi service, where users are instantly linked with other passengers going in the same direction as they do when they order a journey. The automobile ridesharing mobile app greatly encourages its users to carpool, reducing the service’s overall carbon footprint.

The largest transportation network firm in Dubai, Careem, also sells pre-owned food trucks. Over 100 cities and 14 countries across the Middle East, Africa, and South Asia are serviced by the Careem taxi app. Careem is a mobile app that streamlines the process of hailing a taxi and paying for the ride.

You can select a vehicle model and decide between two options: Ride now or Ride later. The final destination is chosen to determine the fee. You can monitor your ride in real-time, find out when the driver is expected to arrive, and make a secure payment all within the app. Whether the passenger is on their way to work, the airport, or to spend Thanksgiving with relatives, Features-packed and ready to go.

In cities where the Ola platform has flourished, an estimated one million automobile owners are finding new careers as taxi drivers. The Ola app is operational in 65 locations, and the firm has acquired over 4,50,000 vehicles, making it the fastest and most widely utilised taxi app company globally.

Some of the advantages are free Wi-Fi, instant discounts, and cashback deals. It also ensures minimal route deviations, lessens pollution, and speeds up travel times.

Get the top mobile app developers if you want to launch a taxi booking app. As a full-service provider, Wama Technology Pvt. Ltd. offers an online dashboard and an app for hailing taxis. They provide the industry standard for Web and mobile app development.