What's the Best Framework for 2022 Projects: Django or Ruby on Rails?

It is general knowledge that, among the many web development frameworks available to programmers, Django vs Ruby on Rails are the most well-known and widely used. They are rapidly overtaking all other web frameworks in popularity, and all signs point to this trend continuing for the foreseeable future. 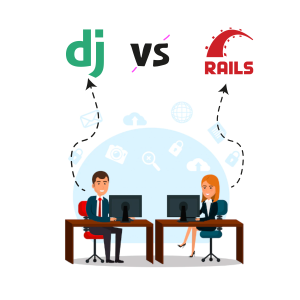 Nonetheless, we are in the middle of a debate, so let’s examine it

Even though both Django and Ruby on Rails are popular, framework wars like this one are gathering a lot of steam and never seem to end. As a result of this potential, we’ve done the research that’s required to provide our perspective.

We evaluated these two frameworks using 18 different criteria to determine which is better since they are both widely used by top-tier web and mobile app designers and developers. However, before we go any further, let’s first clear up any misunderstandings regarding what they are.

A definition of Django would be appreciated

There has been a Python web framework called Django since 2005. It’s the go-to choice for creating Python apps. A significant factor in its extensive popularity is its free, open-source framework that may be used for any application. Developers have universally praised Django’s various features. It was created to simplify the process of creating sophisticated websites that rely on back-end databases. This framework’s design is clean, practical, and easy to use.

What is Ruby on Rails, exactly?

Ruby on Rails is an MIT-licensed framework for building web applications that run on a server. Rails provide excellent out-of-the-box database, service, and page architectures as a model-view-controller framework. It is regarded as a productive method among programmers regarding the coding process. The core principles of this design are DRY (Don’t Repeat Yourself) and Convention Over Configuration.

What Are the Major Differences Between Django and Ruby on Rails?

Django is written in Python app development, whereas Ruby is the language of choice for Rails. Ruby’s adaptability, independence, and understandable syntax are a few reasons for its popularity. However, Python is often regarded as a top programming language because it focuses on writing clear, readable code.

The name “View” refers to the Regular Expression-based URL Dispatcher that governs what visitors are supposed to view, while the term “Model” refers to Django’s database to build the data structure. Finally, Template is an abbreviation for a web templating system that combines Django Template Language and other related technologies (DLT). Django itself handles the controller functionality of this project.

Many people utilize Django more than Ruby on Rails since Python is more popular. This is the main factor that has contributed to Django’s success compared to Ruby on Rails. Now more than ever, it is one of the most popular programming languages, and its usage is rapidly expanding. Consequently, many libraries and packages exist for usage with Python and Django, which may be used to speed up the feature development process.

Interface for Users As far as user experience goes. We can safely state that Django and Ruby on Rails are the best frameworks. This is because both were designed to provide customers with exceptional luxury. All online app developers now have access to these web-centric frameworks, which allow them to construct websites that are not only beautiful but also packed to the gills with faultless extras and extensions.

Swiftness and Efficiency in Action

According to a speed comparison of the two frameworks, Ruby on Rails is found to be 0.7% faster. This is because Rails has access to a wealth of fantastic modules and plugins that might potentially increase the framework’s speed and, in turn, its performance. Django, despite this, is a great web framework solution since it facilitates rapid development processes and offers a reliable basis for websites.

It is impossible to make any forward without a combination of creativity and consistency. One person may be selected if they can do both tasks with ease. Ruby on Rails can handle both of these tasks since it encourages code reuse and has fewer dependencies. More than that, it uses the Convention over Configuration approach, which removes the configuration burden from the programmers.

On the other hand, the Python programming language has a more conventional strategy for tackling problems by sticking to any method that has previously been shown successful. It guarantees the solution’s reliability.

Ruby on Rails and Python Django are two distinct web development frameworks, but comparing them head-to-head is a simple process. Due to the ease with which Django can be installed, the complete process of setting it up should take no more than a minute.

Security since security is an integral part of any website or application. We couldn’t help but discuss it in our Django vs. Rails comparison.

Probably, Django Ruby on Rails imported this feature from Python. The fact that NASA uses the Django framework in Python is, in and of itself, enough proof of its extreme security. Django’s middle wares assist, whereas Rails’ active records constitute the backbone of the framework. Protections against cross-site scripting (XSS), SQL injection, and other related vulnerabilities are available in both Django and Rails.

Django’s web framework may have inherited Python’s scalability, but it’s still not quite as fast as Ruby on Rails. In part, its enhanced scalability may be attributed to its freedom and flexibility in terms of coding. Heavyweight web development frameworks like these were built with scalability in mind—nonetheless, Django and Ruby on Rails triumphs as the best framework for software development.

Synopsis of the Variations Between Django and Ruby on Rails

Though we have already gone through the main differences between Ruby on Rails and Django, we have included a summary chart for your convenience.

While both Django and Ruby on Rails are excellent web frameworks, they are in a constant state of competition with one another. However, there are specific fields where one is more vital than the other. So why wait? Contact Wama Technology and get the best options!